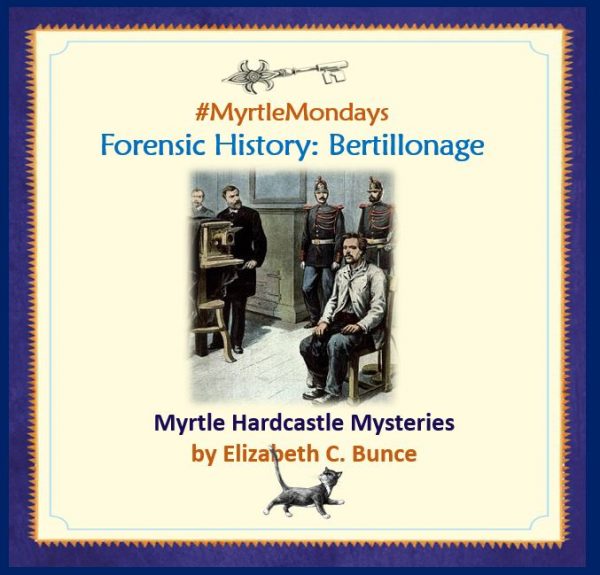 If you (like your Learned Author) are an ardent fan of “Forensic Files,” there’s one technique you’ve likely never heard Peter Thomas discuss. Yet in the late 19th and early 20th centuries, bertillonage was at the cutting edge of criminal science. Let’s take a look at the fascinating rise and fall of this groundbreaking method of criminal identification.

Pioneering criminologist Alphonse Bertillon poses for one of his own innovations: the mug shot (1913)

As criminal justice grew more systematic and scientific in the late 19th century, one question captivated those at the forefront of hunting criminals: how to identify the culprits? One of the first and most effective attempts to create a catalogue of offenders was the brainchild of a French policeman, Alphonse Bertillon. Called “bertillonage” in its day, Bertillon’s techniques have evolved into today’s science of biometrics.

Tom Cruise faces off against a retinal scanner (Mission Impossible 4)

In the 1880s, Bertillon was a records clerk at the Paris Prefecture of Police, with a keen interest in anthropometry: the study of human measurements and physical variation. The son of a renowned French anthropologist and statistician, Bertillon swiftly realized that the Paris Police records were outdated and inefficient, and set out to correct that, creating a modern method of police recordkeeping and revolutionizing forensic science.

1896 chart showing the critical measurements and how to take them

Bertillon’s system involved the collection of specific physical measurements, carefully drawn and recorded, as well as precise photographs of the subject.

Bertillon record of a prisoner in Ohio (University of Pittsburgh)

What truly made Bertillon’s system unique—and useful—wasn’t the measurements, however. It was the cataloguing, the data processing, storage, and retrieval. Bertillon simplified and categorized the measurements into easily-cross-referenced records that could be swiftly sorted and culled when wanting to identify a prisoner. Prior efforts to keep prisoner records had been haphazard and unsearchable, making research too time-consuming to be practical. Bertillon’s system was the AFIS or CODIS of its day.

Thanks to the ease and efficiency of the techniques, Bertillon’s system was soon adopted by law enforcement agencies and prisons worldwide, and for several decades was a standard tool in criminal detection.

Bertillon: A killer always leaves traces when he departs

Although advanced for its time, bertillonage had several drawbacks. Unskilled or biased practitioners, as well as worn or damaged equipment, could lead to errors—most notably in the remarkable case of American inmates Will West and William West, African Americans interred at Leavenworth Prison with similar names and supposedly identical anthropometric measurements. The West case called attention to the propensity for racial bias to creep into the measurements, however objective they were intended to be.

What finally led to the downfall of Bertillon’s system, though, was that it could only be used to identify suspects already in custody. It was no help at all in determining who might have committed a crime. Unlike fingerprints or DNA, criminals don’t leave their bertillon measurements behind at a crime scene. Useful only for identifying repeat offenders, bertillonage was gradually phased out in favor of fingerprinting.

Yet Bertillon’s legacy lives on. His pioneering advances in crime scene photography, mug shots, ballistics, fingerprint analysis, and forensic mold-making (for tire impressions and footprints) formed the foundation of methods still in use today. And the science of anthropometry is still useful, if not for identifying criminals, then for helping to identify victims. Forensic anthropologists and artists use anthropometric measurements to determine sex, age, ethnicity, height, and even appearance of human remains.  Read more about how forensic sculpture brings the faces of the dead to life in this Smithsonian article.

Forensic reconstruction of “Jane,” an adolescent girl from colonial Jamestown who perished during the “Starving Winter” of 1609-10. Read more: Discovering Jane

Interested in trying your hand at bertillonage? Here’s a handy downloadable chart for you and your classmates to take your own measurements.