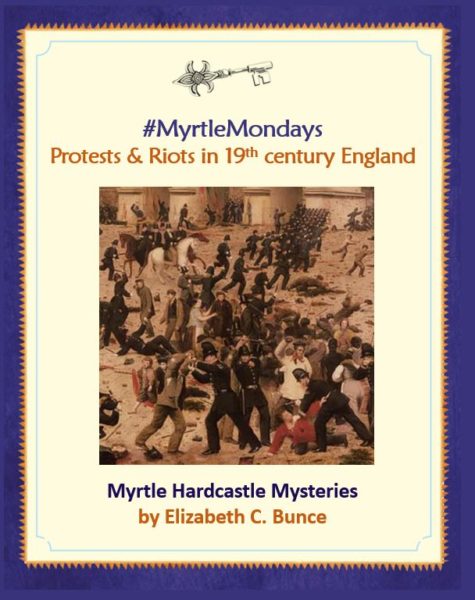 I generally keep things light over here, but as an author of murder mysteries for kids, I try never to forget that the reality of murder is always an ugly, dirty, painful business. And while we want our police to be the heroes in the pursuit of justice, that’s not always the case.

Protests against injustice are a time-honored method of encouraging social change—large and small. Indeed, they form the foundation of some of our most significant historical events. The killing of several anti-British protestors, including eleven-year-old Christopher Seider and a mixed-race man, Crispus Attucks, during demonstrations in Boston in the winter of 1770 helped spark the Revolutionary War—which, in turn, led the framers of the Constitution to include protections for the right of Americans to peaceably assemble for the redress of grievances.

This right was secured in part because of England’s Riot Act of 1714 – 1967, which permitted authorities to disperse any groups of twelve or more people, if local officials determined that they were “unlawfully, riotously, and tumultuously assembled together.” Violating the Riot Act was a felony, subject to the death penalty (more than 200 offences were capital crimes in England in the 18th century—everything from murder to shoplifting to cutting down somebody else’s trees). There was a catch, however. Officials had to publicly invoke the riot act before the assembled crowd in order for the law to be enforced (“reading the riot act”).

The English government felt such a law was warranted because the 18th and 19th centuries saw so many spirited demonstrations against all sorts of injustice, including religious strife in the 1710s (during which the law was enacted), voting rights in the 1860s (during the Hyde Park riots), and 1887’s Bloody Sunday, in which years of economic depression boiled over among London’s working class, and an organized march turned into a violent clash with the police.

The Hyde Park suffrage riots of 1866, from Illustrated London News

Some demonstrations were more locally focused.  Just like we’re seeing today, it was not unusual for people to gather to protest miscarriages of justice. In 1871, after the man accused of the brutal murder of sixteen-year old Jane Clouson was acquitted, protests broke out among supporters of both sides of the issue: those who felt justice was served demonstrated near the Old Bailey courthouse, and those who did not marched, chanted, and carried effigies outside the home of defendant Edmund Pook for five consecutive nights.

Newspapers printed pictures of the Pook family home, so protesters could easily locate the target of their rage

What had so enraged the public following the trial? Pook was the more privileged son of Clouson’s employers (she was a maid-of-all-work in the Pook household), and the locals, the working-class folk of her neighborhood, considered Jane Clouson a part of their community. In their eyes, this was yet another example of the rich and privileged getting away with injustice at the expense of the poor. Those protesting at the courthouse felt that the acquittal was the result of shoddy and malicious police work: believing police had framed the innocent Pook, they considered his acquittal a victory of jurisprudence.

In the second Myrtle Hardcastle Mystery, How to Get Away with Myrtle, Myrtle encounters protesters outside the local police station, demanding justice for a murder victim. This was one aspect of the 19th century justice system I wanted to illustrate—proof that it’s not always the powers that be that must secure our most treasured freedoms, but we the people. Such demonstrations have historically served as the final recourse of people who feel their concerns have too long gone unheard.

For more historical perspective on the current events, here are some useful links:

Protests and Riots at History.com